When peeling an onion …

… you discover layers you haven’t seen before. Culture consists of different layers, too. There are many ways to visualize the concept of culture but one of the most famous and most used one is the Culture Onion by the dutch social psychologist Geert Hofstede. This model shows that culture consists of different layers – just like an onion. Some layers are immediately visible, others are only visible when you actively ‘peel the onion’. This means, in order to fully understand a culture, you have to invest some time and energy to discover the hidden layers and reach the core. Hofstede’s model consists of three layers and a core. The closer the layer is to the core, the more difficult it is to change it’s content and the less consciously aware people are of it’s content. This means, that the content of the core is so deeply rooted in us that we don’t think about it. All layers are intertwined and the content of the core is reflected in the visible practices of the outer layers. 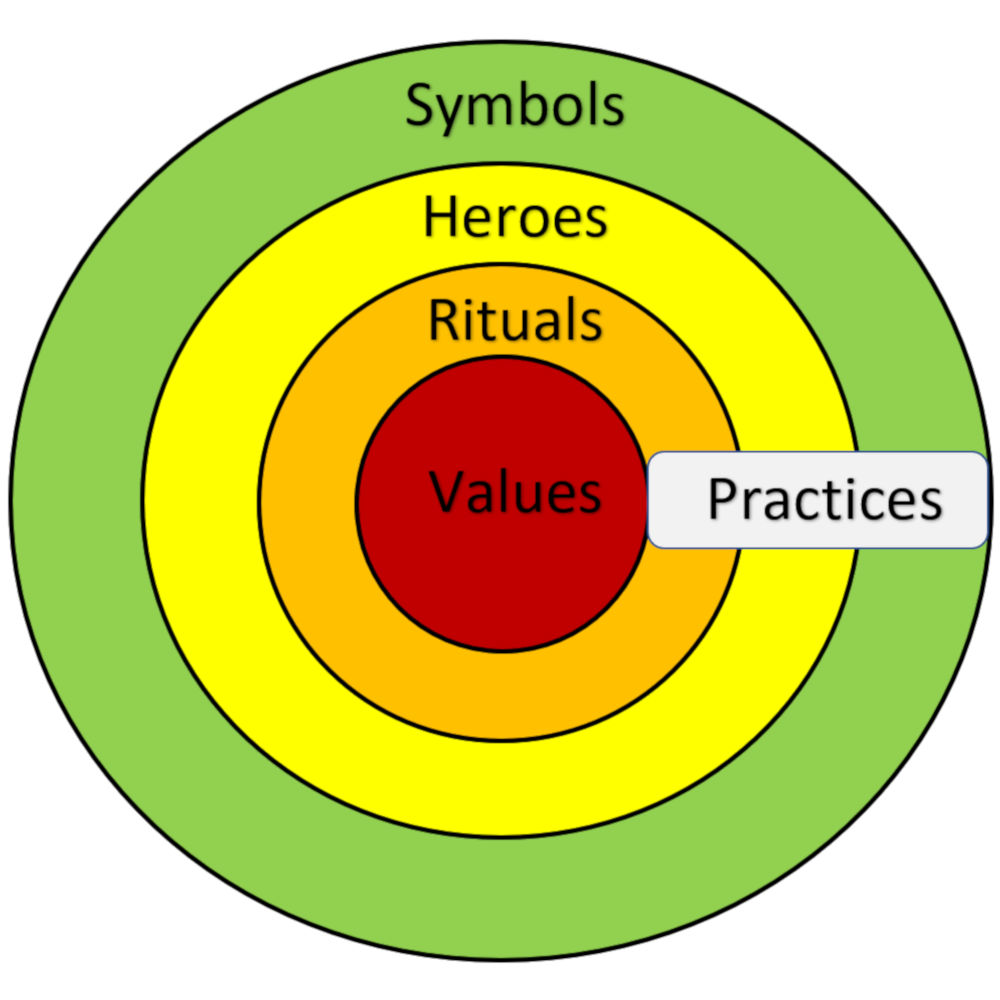 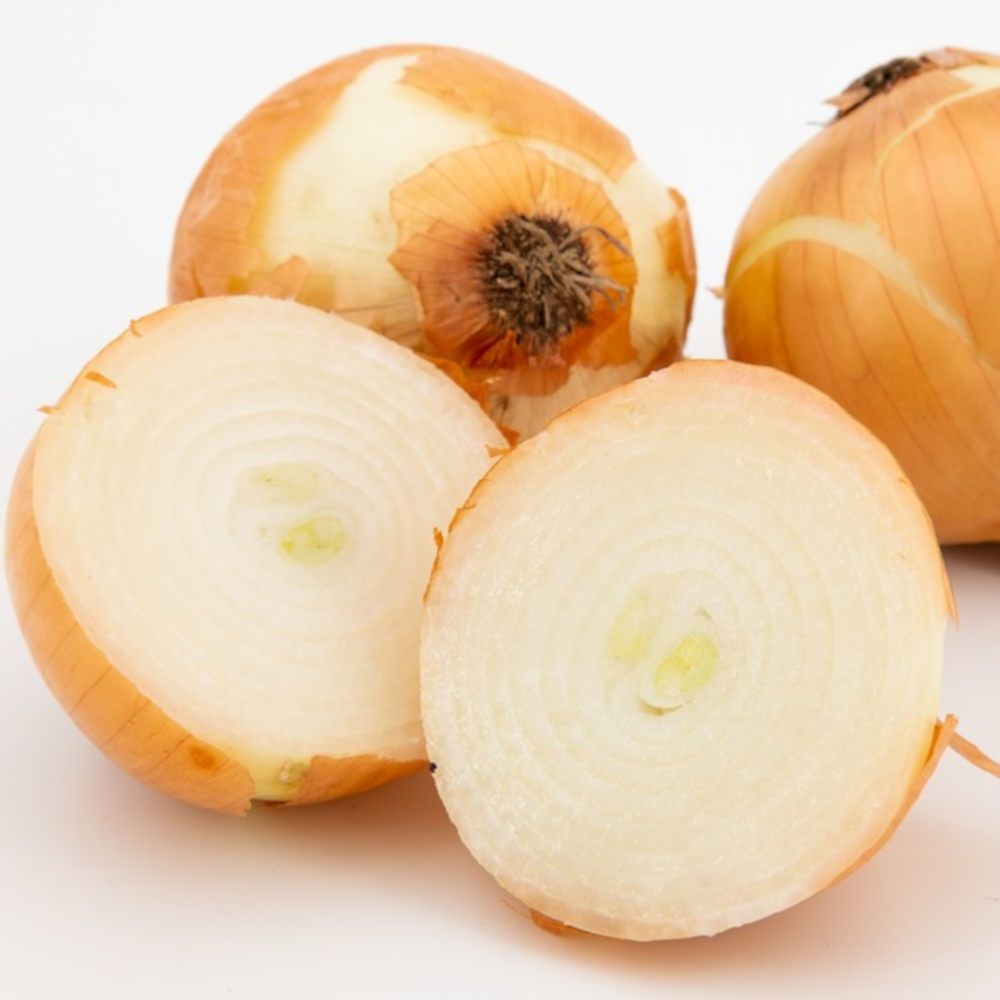 The first and outer layer is about the symbols of a certain culture. These are visible elements like flags, brand names, traditional clothes, architecture or signs. They can be changed relatively easy, sometimes according to new fashion taste.

The second layer describes the heroes of a certain culture. They are often role models of a culture that represent certain values appreciated by that culture. Heroes can be both humans and fictional characters from all fields (e.g. politics, pop culture or history).

The third layer consists of common rituals and traditions of a certain culture. These are the ways how people treat each other, routines in everyday life and on special occasions that feel normal for members of that specific culture. Examples are body language, how people greet each other, eat meals, get married or practice their religion.

Last but not least, the core consists of the values of a certain culture. These beliefs, norms and attitudes are extremely difficult to change, if that is possible at all. These are much harder to recognize without a deeper analysis and understanding the interaction between the different layers. Examples are religious beliefs, hierarchies, how people handle mistakes or the understanding of leadership.

A culture consists of the interaction between the layers and the core. In principle, each group within the certain culture can develop its own (sub) culture which affects the outer layers while the core stays the same. An intercultural training helps people to look beyond the three layers and understand the why behind the visible layers.

The importance of the model in practice

This model is especially valuable to show how vague and hard to grasp the concept of culture is. When talking about cultural differences or even conflicts, it helps to understand which layer is involved. Sometimes conflicts are not rooted in different values but in the outer layers that are changeable practices. If that is the case, a solution of the conflict is much easier.

Since I am socialized in Germany and have the best insights in German culture, I use this culture to illustrate the model explained above. Of course, Germany is a diverse country and this is just a model that cannot depict everything. Nevertheless, especially the values and norms of the core are shared by the majority of Germans. I start with these to show how they affect the outer layers.

If you ask around about German values, it is most likely that many instantly say honesty. This value is reflected in rituals like how they handle conflict. If there is a conflict between two people, it is most likely that this conflict is directly addressed to solve it. In general, the style of communication is relatively direct and directness is perceived as honesty. Concerning heroes or rather role models, in the political sphere Germans tend to like and vote for politicians that are rather trustworthy and sincere and don’t put up a big show. Maybe that’s one of the reasons Angela Merkel is so successful. The saying Ehrlich währt am längsten (honesty is the best policy) reflects this value on a symbolic level and is often quoted when someone has to decide to say the truth or lie for his own benefit. It reflects a strong belief that honesty will be rewarded in the long run. On the other hand, the fairy tale Pied Piper of Hamelin teaches children that dishonesty will have severe consequences. 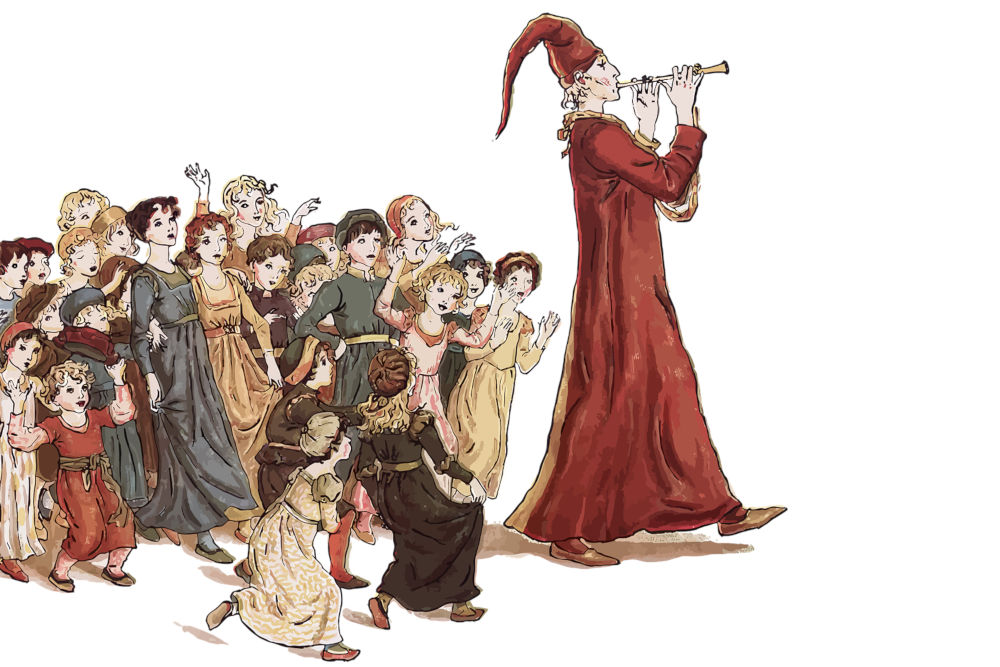 Another crucial value for Germans is hard work. In some companies, it is customary (a ritual) for the manager to be the first to come and the last to leave the office in order to prove his ethics of hard work. People who became successful because of discipline and hard work, are valued a lot. A good example is the German national soccer team or any other athlete. Many of the German heroes of today are athletes. The Swabian proverb Schaffe, schaffe, Häuslebauer (work hard, homebuilder) hits the nail on the head and motivates students to work hard to be able to build a home one day. The well maintained homes and gardens reflect these work ethics.

Of course, punctuality is another important value for Germans. Its importance is seen when traveling on trains throughout the country: though the Deutsche Bahn is generally very reliable, every so often there is a delay  which contradicts the German value of punctuality so much that people start complaining about it. Then, they even talk to strangers which happens rarely in Germany due to the norm of not interfering in other people’s personal space..  The German a cappella band Wise Guys even dedicated a song to the Deutsche Bahn and its unpunctuality (yes, the Germans have a special love-hate relationship with their train system):

In almost every room you can find a clock, many people wear watches and they tend to plan everything well to be on time for basically everything. Timetables of public transportation is timed down to the minute. I think the value of punctuality is closely tied to other German values like hard work, efficiency and order.