One of my personal highlights in Vancouver so far was being part of the Decentralized Dance Party (DDP). It was one of the best parties I have ever been to because it was just fun: Ridiculous costumes, awesome dance music and lots of fun people. Everyone was invited to come and join the crowd, dance with us in the streets and have a good time. Let me explain why this party was such an amazing experience for me – and hopefully you are excited to go one day too 😉

Teaser for the Decentralized Dance Party (DDP) in Vancouver, 23rd of June 2018:

The brains behind this project are two guys called Tom and Gary from Canada who were tired of conventional partying. They are convinced:

Partying is misunderestimated by 99% of the populace. Accordingly, it is rarely done properly and has never garnered the respect it deserves. Partying is: forgetting who you are while remembering what you are. It is the complete loss of the social conditioning that makes adult life monotonous and depressing and has the power to be a transformational spiritual experience.

With this attitude, they already threw more than 80 decentralized parties in North America and Europe since 2009, aiming to go to all countries around the world to unite people. 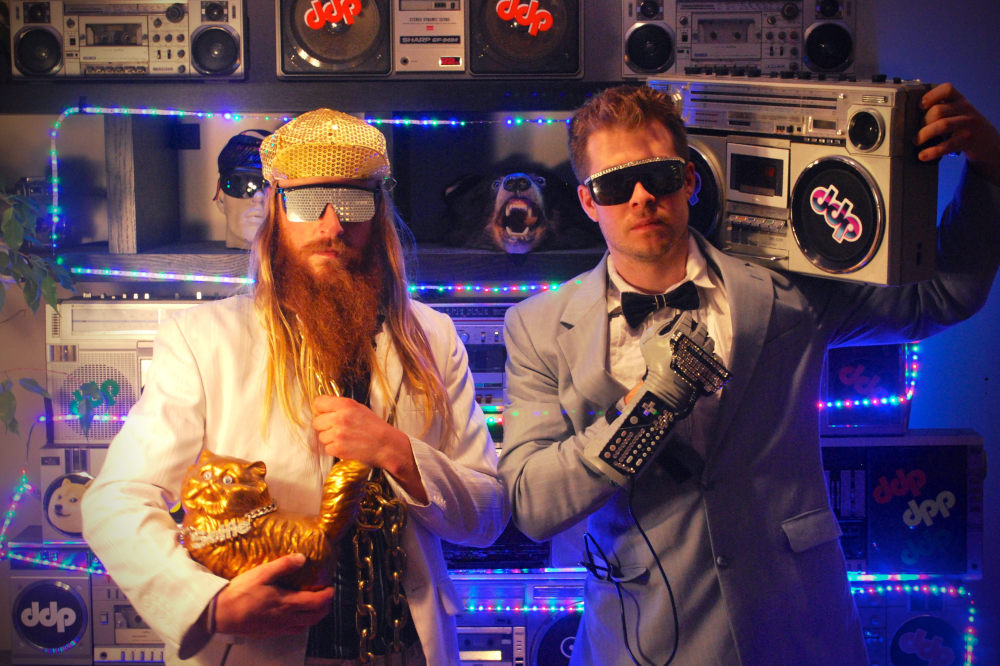 The absent of important elements of ordinary parties couldn’t be found there: No alcohol or drugs, no judgment, no people to impress, no elements of yourself to hide or feel awkward about, no small talk, nothing! None of that stuff that makes you nervous about going out. If you overcome these conventions of ordinary partying, you can free yourself:

As children, we constantly climb on, jump off, and explore everything. We want to run, scream, sing, dance, and play as hard as our bodies will allow. We are fearlessly responding to nature’s Divine Programming, which western society works very hard to subvert and destroy by incessantly training us to sit still and be quiet and follow the rules and dress and act identically so that we can join the labor force and reproduce another batch who will do the same. It destroys our natural fun-seeking, creative impulses and is the reason so many are depressed and afraid to sing or dance or deviate from the norm. Overcoming this conditioning is a formidable challenge. Partying can get us there.

In their Party Manifesto, they explain the important elements you have to consider when organizing a fun party. The most important thing is to create a welcoming atmosphere where everyone can let go to truly have fun. People should wear ridiculous clothing to overcome their inhibitions, making it fun for them and the people around them. They can bring props to share with other people, like pogo sticks or trampolins or bobbycars to rediscover the inner child. Of course, the music is crucial too: It has to be loud (a party is no place for conversation), well-known and high-energetic so that no one can resist moving with the beat. At the DDP, hundreds of boomboxes are carried by the crowd, playing the same song simultaneously, spreading the songs everywhere. Since everyone can feel free of judgement, alcohol and other drugs are not necessary. Only a bad party has a need for alcohol:

People drink a lot at most Parties because most Parties are boring and drinking is therefore necessary to loosen up and have fun. This is due to poor music, dull clothing, lack of props and lame atmosphere; all of which inhibit singing and dancing and living free. But if the Party is really good, the atmosphere alone will inspire people to lose their inhibitions and freak out and drive the energy to ridiculous heights and make it an incredible experience for everyone.

Because there are so many restrictions for partying in indoor places, the DDP takes place outdoors at public places where no residents are disturbed. The crowd moves from one place to the next, while never leaving any damage or waste behind. No work for security guards or policemen.

This is because the prime objective at a DDP is celebrating life, enjoying music, and connecting with complete strangers on a deep and fundamental level- not getting drunk and being an idiot. Partying by elevating consciousness, rather than destroying it.

Much more than a Party, the DDP has also been a very interesting social experiment; clearly demonstrating that by following the above guidelines, it’s possible to unite thousands of people of all ages, cultures and social groups in order to peacefully celebrate our Common Humanity.

Well, Tom and Gary’s ultimate goal is to bring people closer together and make the world a (more) peaceful place.

What I loved about the DDP

I never liked partying that much because it often felt like a big parade where I had to pretend being someone I just wasn’t. It wasn’t fun for me when people watched me, judging my clothes, appearance, dancing and being molested by drunk guys on the dance floor. So, I was interested to go to the DDP but not expecting something very different. Luckily, it was a completely different experience.

We got some funny costumes that provoked a few comments from passers-by on our way to the party – all thumbs ups! (Even a policemen stopped us asking for the party we wanted to go to). When we arrived at the Vancouver Art Gallery, the meeting point for the DDP, there were only a few people with costumes but a guy with a micro and music animating the crowd to dance. Many people stood around, filming us dancing and that was a weird feeling, I didn’t like that very much. But the later and darker it got, the more people came.

Finally, a big crowd coming from the Dogecon 2018 joined us with boom basters and awesome costumes matching the theme ‘to the moon’ perfectly. They even brought a moon made of Styrofoam and a huge mask of Doge (internet meme)! We danced for around one and a half hours at the Art Gallery before we moved to a public skating place where we had some fun. Then, we went to (or rather: in) a fountain for refreshment before partying at a public underground parking. It was amazing for me to see how the security guard there just let us pass by and party. We walked around the streets of downtown Vancouver for a while and it was awesome to see how the people organized themselves (with the help of the Banana Task Force) to stop at red lights, patiently waiting and dancing. The reactions of car drivers and passers-by were positive and I think some more people joined us on the way. We went to the harbor where we listened to some slower songs, leaving then to go to the SkyTrain station ‘Waterfront’ close by. Unfortunately, we had to leave the party by then because we had to rest a bit before going to work the next day. But I am sure they had some more fun for longer.

For me, it was amazing how there was no policemen stopping us from having a great time. In Germany, this would be different I guess – I think you would even have to announce a gathering beforehand (maybe even proving the authorities that everything will be secure). But that’s just a guess … I also liked how nice the people were. There was no one molesting me or looking at me weird. There were no drunk people, maybe some had some marijuana (which is in the process of completely being legalized in Canada) but no one was aggressive. It was just a great atmosphere, I could just dance, play with balloons, jump on and off things and have a good time. The music was great and every song made my body move, going with the rhythm. Can’t wait for the next DDP! 😀

Last but not least: A few impressions from the DDP 2018