Being and becoming Oromo

Today, more and more refugees come to Europe to seek refuge, peace and a better life. Many of them are Oromo from Ethiopia. But who are they? Why are they fleeing Ethiopia, a country that has never been under colonial rule and where the African Union is based, an assumed peaceful country? In different essays, this book gives us an historical insight of what it means to be and become Oromo and which political powers shaped nowadays Ethiopia.

Quote from the book:

The Oromo are one of the most numerous peoples of Africa but general recognition of their distinctive culture and identity is comparatively recent. These essays, through an examination of the Oromo experience, seek to explain why recognition took so long and to analyse some aspects of Oromo culture.

Why I recommend the book

This book fascinated me, especially when I learned about the Gada System I was captivated. The book also helped me to understand the situation of the two refugees I am seeing since it deals with the Oromo Liberation Front (OLF) in some chapters. I think this book can be of interest for all who work with Oromo people – or are just interested in Oromo-culture and history.

Dr. Paul Baxter was a distinguished British anthropologist who devoted his life to Oromo studies. Born on January 30, 1925 in England, Paul Trevor William Baxter, popularly known as Paul Baxter or P.T.W. Baxter, earned his BA degree from Cambridge University. Influenced by famous scholars such as Bronisław Kasper Malinowski, Charles Gabriel Seligman, and Evans Pritchard, Paul Baxter had a solid affection for social anthropology. He went to Oxford University to study social anthropology. In his long academic and research career, he studied the Oromo from northern Kenya to Wallo and Arsi to Guji and so on. Baxter died on March 2, 2014 (source: oromianeconomist.com). 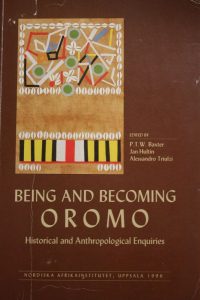 Being and becoming Oromo - historical and anthropological enquiries